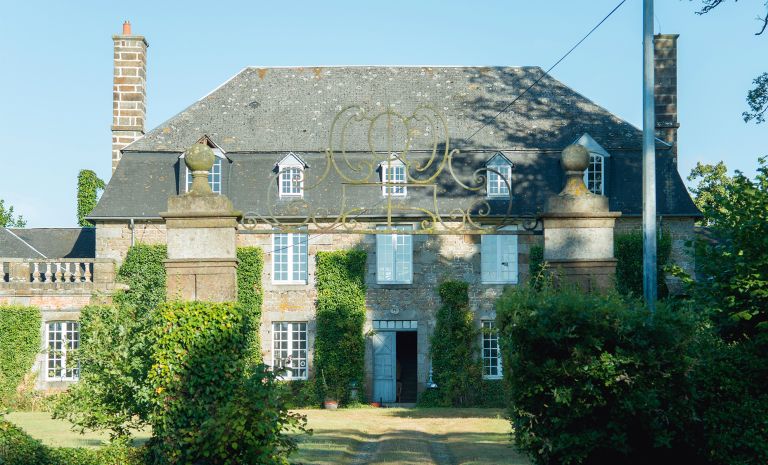 Owner: Artist Peter Gabrielse, whose sculptures have been exhibited in Antwerp, Brussels, Paris and New York. He lives in Le Château with his cat Poes
Property: A manor house that was built in 1727 in Saires-la-Verrerie, Normandy, France
Essential repairs: Peter installed two new bathrooms and replaced the kitchen
Layout: The 600m² house sits in nine acres and features three bedrooms and two bathrooms, plus several rooms used for storing Peter’s artwork and supplies. Outbuildings in the grounds have been converted to guest accommodation

After living in the Zeelandic Flanders region in the south-western Netherlands for many years, artist Peter Gabrielse decided that it was time for a change of scenery. ‘I wanted to live somewhere surrounded by peace, away from the noise’, he says.

His objective was to buy a little château or a rural manor house and, as his home at the time was close to the Belgian border, he cast his net far and wide, looking for houses in the Netherlands, Belgium and, in particular, France.

‘I was used to travelling there once a month to find materials for my architectural box-sculptures, so I already felt that I had a strong connection with the country, and I have always enjoyed the French lifestyle.’

Find out what he did next. Then browse through more real home transformations.

During his search, Peter started gathering inspiration from various French magazines and realised that his attention was consistently drawn to the region of Normandy. ‘I decided to hop in the car and drive there to get a better feel for the area. I also went to northern parts of France and into Belgium, but my heart was clearly set on Normandy. However, I decided that it was simply too far away to be considered,’ he explains.

But when a French estate agent showed him photographs of Le Château a month later, he quickly forgot his original misgivings. ‘I instantly liked the property from the pictures, and by viewing it on a particularly dull and rainy day, I was able to get a true sense of it. When I walked into the entrance hall, I knew within seconds that I wanted to buy it.’

On Peter’s return to the Netherlands, the estate agent suggested that he should visit the property again on a sunnier day, but he decided that there was no need for another viewing. He sent in an offer by fax, which was accepted the very next day. ‘Suddenly, it hit me: I had just bought a large property and had absolutely no idea what I wanted to do with it!’ he says, laughing.

Once the manor house was his, Peter began researching its history. He discovered that during the French Revolution, people had threatened to burn it down, but luckily the local priest managed to talk them round. Unfortunately, the house was still looted and all of the owner’s possessions were burnt beside the church.

Since happily settling in France in 2000, Peter has spent most of his time changing the interior of the 18th-century property, which now reflects the composition of his box-sculptures in that it gives a nod to the past and has a smattering of ‘dust and spiders. Now that my workshop is much larger, I have found the perfect excuse to buy even more materials,’ he says.

Preserving the house’s original features and atmosphere was key to Peter’s design. ‘One of the reasons I liked the place so much was its authentic style.’ He knew that he wanted to keep the original layout, but most of the house had stood empty for many years, so he needed to add two new bathrooms and update the kitchen, as those rooms were in need of most attention.

Elsewhere, he has simply stripped away the previous owner’s décor, revealing the house’s natural beauty. ‘Most of the walls were covered with dreadful flowery wallpaper, which was the first thing I took down,’ he says. ‘I was thrilled when I discovered the fabulously rustic walls underneath, which I left just the way I found them.’

In the sweeping hallway, an impressive granite staircase remains untouched. Peter took down even more floral wallpaper and uncovered the original green walls. ‘Discovering that was like unwrapping a beautiful gift,’ he says.

Outside, the house was surrounded by 11 annexes and barns, several of which were demolished, with the rest renovated as accommodation for friends and family. Peter installed two water basins by the large entrance gate in place of the original ‘castle moat’ that would have once been there.

‘I wanted to restore a little bit of the past by creating these basins on the right and left-hand side of the gate. I think they add a bit of extra glamour to the exterior of the property, too,’ he says.

Since moving into the house, Peter has been enjoying the French lifestyle. He likes cooking and makes the most of the various fruits and vegetables that his garden has to offer. It has also enabled him to collect lots of material for his sculptures.

In many of the rooms there are drawers and boxes of all shapes and sizes filled with accessories such as coins, buckles, rings and miniature ceramics. ‘I have enough material for the next few years,’ he smiles.