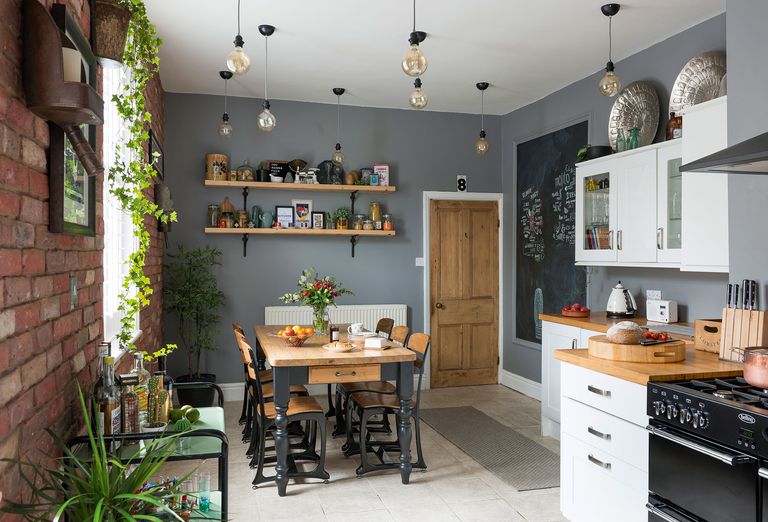 Do childhood dreams really come true? Ask Danielle Hughes and the answer would be a resounding ‘yes!’ As a youngster, she daydreamed about living on the street around the corner from her home. ‘It had such a nice feel to it and I loved the individual character of each house,’ she says. Little did she know that years later she’d get the opportunity to turn that dream into reality.

Find out how she did it below. And, for more inspiration, see other real home transformations and our restoration advice for practical information.

Danielle and Jason’s previous home – a modern new-build townhouse – couldn’t have been more different from the period properties she’d always admired. ‘It was spread over three floors, which was far from ideal with young children,’ Danielle
says. ‘We always felt it lacked a certain something. I grew up in an Edwardian
house and love how a period property is full of surprising little details.’

The owners Danielle Hughes, a team leader, lives here with her husband, Jason, a quality manager at a local brewery, and their two sons, Lucas, nine, and Jacob, five

The property A three-bedroom Victorian semi-detached house in Preston, Lancashire

When a house on Danielle’s favourite street came on the market, the couple couldn’t believe their luck and immediately snapped it up. ‘I knew instantly that   it was the right one for our family,’ says Danielle. ‘The house had been given a makeover for a quick sell so   all the walls were painted in magnolia and white, but   it had high ceilings, big rooms, and original fireplaces and cornicing. We could see the potential to create an unusual family home.’

In the kitchen, the units were virtually new, but the space lacked personality. Painting the walls dark grey was an inexpensive way to add warmth. Inspired by something that they had seen at a property show, the couple also put up a brick slip wall to create interest. ‘I love the industrial look, so we replaced all the spotlights with hanging bulbs and created open shelving from scaffolding boards and brackets I sourced online,’ says Danielle. ‘I found the table on Ebay for £50 and painted the legs grey to match the new colour scheme.’

High on the couple’s wishlist were elegant shutters to restore some of the house’s original character. ‘It was one of our biggest outlays but we knew they’d make a difference, so we decided to set aside a large part of our decorating budget to have them fitted,’ she says. The £12,000 bill for the shutters left limited funds to do
up the rest of the house, which meant the couple were forced to be inventive with their decorating ideas.

Keen to minimise their budget, the couple tried to tackle as much of the work themselves as possible. ‘Jason trained as a joiner when he was younger so he’s happy to try his hand at anything,’ Danielle says. ‘He researches how to do things on the internet, then tackles the jobs. I’m a keen decorator too, and by combining our skills we’ve probably saved ourselves thousands of pounds.’

The only room they didn’t feel confident to complete themselves was the bathroom, with its false plastic ceiling and blue and white fish patterned tiles on the walls. ‘I was dying to rip it out but I had to wait until  we’d saved up,’ Danielle says.

‘It felt like a very long wait!’ Redesigning the layout has changed the room dramatically. A new bath with shower above sits at one end of the room, while metro tiles with black grout give the space a smart finish. ‘There was   no floor space before, but now it’s less cluttered and works far better as a family bathroom,’ she adds.

Over time the couple have updated their furniture, teaming upcycled designs with antiques. The four-poster bed in the master bedroom is their latest grand purchase. ‘The person selling it had shipped it over from Dubai, but then discovered it was far too big for their home,’ says Danielle. ‘I managed to get the whole bedroom suite for a bargain price off Ebay.’

Living in an old house with so much character does come with some drawbacks. To put up the chandelier in the hallway, the couple had to hire scaffolding because the ceilings were so tall. ‘We’ve found that the most unexciting jobs have cost us the most money,’ Danielle says. ‘We’ve had to budget to replace the chimney flue, repair the roof and restore leaking windows.'

'Upkeep on an older building never stops, but that’s what we signed up for when we bought this place. We wanted a project we could get our teeth stuck into, and I love the individuality of our home,’ says Danielle.