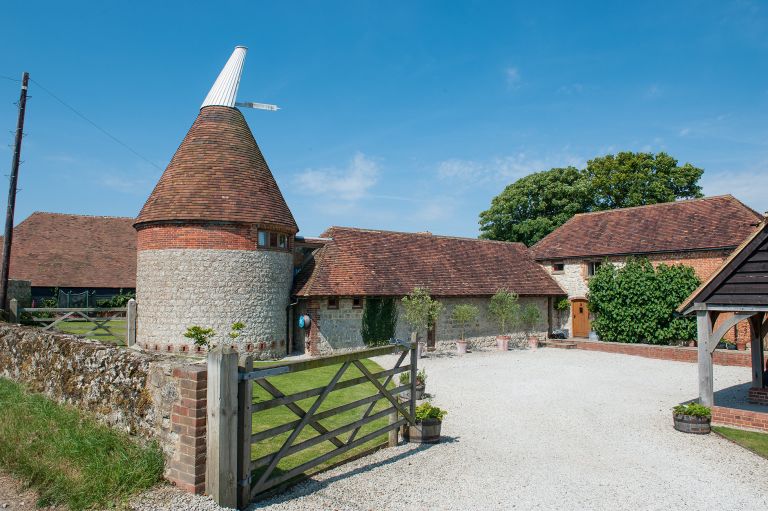 Growing up in rural Kent gave James Lloyd an idyllic childhood that he remembers fondly. The first home thathe and wife Vicky bought together was an apartment in south-west London, close to both their workplaces, but James never forgot his rural roots.

‘Vicky and I renovated the flat, but, with our son Harry on the way, we decided it was time to move out of London to give us the extra space we needed and our children the country lifestyle that I had enjoyed,’ says James. ‘My parents live near Ashford and there are a lot of pretty villages in the area, so it was an obvious place to look.’

With one renovation under their belts, James and Vicky felt confident about taking on another, much larger, project that would give them room to grow as a family. ‘We both love period buildings and were looking for a barn conversion that would allow us to create an interior to our own specification, rather than buying a house that reflected someone else’s tastes,’ says James. ‘We expected our search to take a long time, but straight away I heard of an oast that had come up for sale, which we went to view.’

Previously a grouping of farm buildings belonging to the local manor house, the sale was made up of two plots. One consisted of the oast, along with a former granary, and the second plot included a huge barn with stables.

‘We liked the position of the buildings, in a pretty village surrounded by period properties and an ancient church,’ says Vicky. ‘We made an offer for the oast and granary barn, which had outline planning permission for conversion from agricultural to residential use, and secured it in May 2005.’

After selling their flat in London, the family moved in with James’ parents, which allowed them to save money towards the renovation and to be nearby throughout the project. ‘The builder we chose is a family friend. When he came to look at the oast, he said, “Are you sure about this?”,’ James laughs. ‘We were aware of the scale of the job, but also the responsibility of restoring such a historic building. I always had faith in our builder, though, as he specialises in period renovations, joinery and stonework.’

The couple employed an architect to revise the plans that had been granted outline permission. It took six months of working with the local conservation officer to get the new design approved.

‘We had to argue the point about including conservation rooflights and won them round by explaining the need for natural light and ventilation to make the building functional for residential use. These additions allow natural light to shine into the bathrooms, which would otherwise have been windowless rooms,’ says Vicky.

The builders started work on site at the end of 2005. On the whole, the project ran smoothly, but Vicky and James did experience a few challenges. The granary had been designed as a single-storey building, so consideration needed to be given to the structure that would connect the ground floor of the old granary with the bedroom on the first floor of the oast.

‘The difficulty was the height of the building and the fact that it’s not designed for a residential staircase,’ James explains. ‘With the roof line and height restriction, the solution was to create a staircase to the first floor of the roundel with a dwarf door into the guest bedroom. You have to stoop when you enter, but it adds to the charm.’

The couple originally budgeted for £250,000 to cover the renovation costs, with a £50,000 contingency fund, but they overspent by around £75,000. ‘This was largely down to the bespoke windows and doors, which we imported from Sweden,’ says James. ‘The labour costs swallowed a large portion of the budget, too, because it’s a listed building and we had to take down areas of wall that were three-feet deep, then rebuild and repoint them in traditional mortar and lime, as directed by the conservation officer.’

Such detailed and specialised work came at a cost, but Vicky and James are delighted with the finished result. ‘We wanted it to be a sympathetic and quality restoration. The roof, for example, had retained some of the original Kent peg tiles, but most were long gone and had been replaced with concrete alternatives that were unsuitable and too heavy for the beams,’ says James. ‘We managed to source a French tile that blends in nicely with the originals and was within budget. The roof is such a dominant feature and if we’d got that wrong, it would have affected the aesthetic outcome of the entire project.’

With the creation of a huge interior floor space, it was also vital that an appropriate flooring material was chosen to allow the downstairs to subtly flow throughout the rooms, and from the inside to the outside.

‘We looked at some high-end materials, but when we priced them up, they were too expensive. Instead, we opted for Indian sandstone, which gave us the regular flagstone shape we wanted, but with a contemporary edge,’ says James. ‘We like the clean lines and the way it draws the eye forward through the building. We took it through to the patio, so when the bi-fold doors are opened fully, the interior flows uninterrupted through to the garden patio.’

Ragstone walls remain exposed in many of the rooms — clear evidence of the oast’s agricultural history. ‘We wanted to retain as much as possible of the natural material of the farm buildings, as the ragstone was quarried from the spot the oast is built on,’ says Vicky. ‘It made sense to choose natural materials to complement the stone, with comfy, country-style furniture and textiles that don’t detract or dominate. We opted for neutral tones for the walls, introducing splashes of colour with soft furnishings.’

The interior of the house contains a mix of inherited period furniture and contemporary design. ‘We like simple, clean lines and rooms that are uncluttered but welcoming for our friends and family, as we love to entertain,’ says Vicky. ‘The kitchen had to be made in oak, to sit comfortably with the original oak beams and new oak joinery. It’s a huge space, but it feels cosy and it’s where we spend the most time. I wanted an interior that I could dress up or down as much as I wanted, and to treat the beautiful walls as part of the furnishings, as I think they are the highlight of the building.’

Not long after the family moved into their newly converted home, during the summer of 2007, an unexpected opportunity was presented to them, when the owner of the second plot, which included an ancient barn and stables, told James that he was no longer planning to develop the buildings, ‘We made an offer immediately, as we knew owning the property would secure our privacy and mean that no one could develop around our home,’ says James.

‘My father helped us to buy the plot and we worked together with the builder and a second architect to renovate the barn, which was in desperate need of sympathetic restoration. We discovered that it is one of the oldest barns in Kent. It involved hours and hours of labour to bring it back to its original glory.’

Their move out of London and up the property ladder has allowed James and Vicky to create their dream family home. ‘We feel proud to have breathed new life into ancient farm buildings that had been so neglected, although it’s not just the oast house that has been transformed, but our lifestyle,’ says James. ‘We love living in the countryside. Our children can safely run around outside and really enjoy all the space our new home has to offer. When I see the children playing in the garden, I feel that life has turned full circle.’