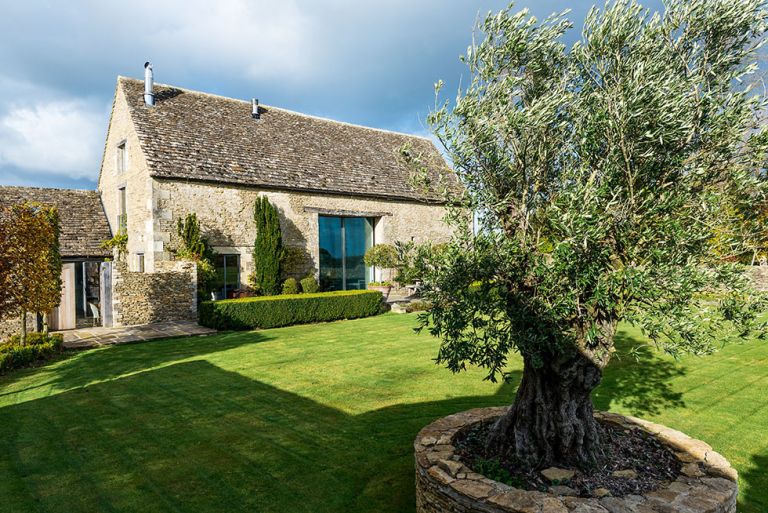 Montreal Barn in Gloucestershire originally belonged to Mark Henrique’s father, David, as part of his farm. It was a neglected, 18th-century agricultural building in the middle of nowhere.

A refectory-style table, made by local carpenter Jamie Gardiner, adds texture to the white interior. Philippe Starck lamps from Holloways of Ludlow provide a contemporary flourish

‘When we arrived, there were just bricks, a roof and a dirt floor,’ recalls Mark’s wife, Felicity. ‘It had been a feed storage barn, and had two L-shaped extensions with mangers. The animals were in those and the courtyard, and the feed was in the barn.’

Mark is a keen cook and designed an island for the far end of the kitchen, which was then custom-built from plastered breeze blocks topped with two slabs of Italian limestone from European Heritage

The building had to be converted which included wiring and plumbing, flooring and window installation. The barn now comprises one huge living space with smaller, cosy rooms behind the main living area. A glass corridor alongside a walled courtyard leads to the new extension housing the children’s bedrooms. This work took about five years.

Tucked behind the dining room is this cosy snug. Felicity upholstered the double-seater sofa in old French linen sheets, and the cabinet is an antique, inherited from Mark’s mother

The decorative fireplace in the living room was an internet buy, but originally came from Toulouse in France. Felicity bought the mirror from Lorfords Antiques. The rug is an auction buy from Sotheby’s

A posy of garden flowers adds a splash of colour to the cool, pared-down scheme

Befitting of its setting, the master en suite has a rustic look, with linen curtains and the barn’s original flagstone floor. A stylish Philippe Starck basin from CP Hart is set on a half table base, made by carpenter Jamie Gardiner, with a marble worktop to match the splashback. The cast-iron bath is by Aston Matthews

The master bedroom is kept deliberately uncluttered to increase the sense of space. Bursts of colour are provided by small arrangements of garden flowers, and an antique chest of drawers that once belonged to Mark’s grandmother adds warmth. Felicity bought the silhouette that hangs above it