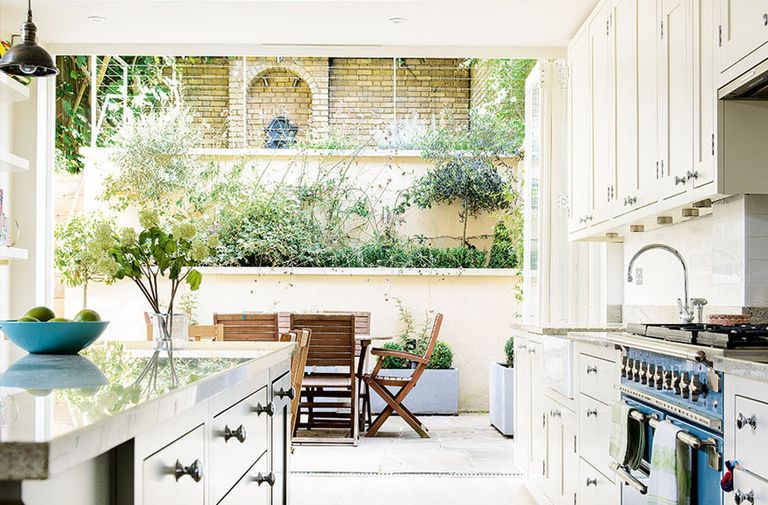 From the first viewing, it was clear to Anna and Christian Kenny that the four-storey townhouse they now call home had a major problem. ‘The kitchen was partially buried below ground, with a tiny high-level window to the rear,’ recalls Anna. ‘We went to an open house viewing and people were standing around shaking their heads, wondering how this awkward room could be improved.’

The house had been empty for more than a year, and the couple decided to take a look, having already made several unsuccessful offers on other properties.

The owners: Anna Kenny, who is a journalist, and her husband Christian, a barrister, live here with their sons Hector, two, and Alfred, nine months

‘I searched online for various architects, and one told us not to bother spending too much money here because it wasn’t worth it,’ says Anna, ‘but we wanted to create a family home with a practical kitchen and remove this dark, damp underground room with no proper connection to the garden.’

Then Anna discovered that a house in the same road with similar issues to the rear of their home had been remodelled by architect Anthony Thomas, and after looking at his website she invited him to visit. ‘I was determined to find an architect I actually liked, and Anthony’s attitude was so positive and enthusiastic I immediately knew we’d found the right person,’ she says.

Anna and Christian both work full-time, so they were keen to engage an architect who could oversee the project. Anthony works with a carefully chosen team of builders and specialist consultants, and this holistic approach ensured he was involved at all stages — integrating architecture, interior design and garden landscaping to best effect.

The house is situated in a Conservation Area, and not only did planning permission need to be secured for the alterations, but party wall agreements were required from both neighbours. This delayed progress and meant that the builders could not begin excavating until the middle of winter. ‘At first we thought that the work would take four months, but due to the complicated planning and party wall process it ended up taking far longer,’ says Christian.

With no rear access to the garden, the couple had to dig the entire area with shovels, then remove the earth out through the living room window on a conveyor belt. Structural steelwork was erected and plaster stripped from the walls, until all that was left was a shell of a building and a pile of earth where the garden had once stood.

‘At one stage it looked as if half the back of the house was missing, and we began to panic that we should have left it as it was,’ says Anna. ‘Fortunately, we were soon able to see an improvement as work progressed.’

As a result of excavating the garden, access outside from the ground floor is no longer possible, and a previous back door has been replaced by a window for a new guest WC. ‘The room is reminiscent of a gentleman’s club, with dark paintwork, patterned wallpaper, and a black and white tiled floor — Christian’s idea,’ says Anna.

‘We saved money by commissioning bespoke kitchen cabinets rather than buying off-the-shelf units. The cupboards go right up to the ceiling, which means there is extra storage space, and the spray-painted finish is much easier to clean than the handpainted cabinets I’d set my heart on. Halfway through designing the kitchen, I decided to change all the lower cupboards for drawers. It’s so much easier to find everything in a drawer — we keep all our plates, serving dishes and kitchen gadgets in them.’

‘We created a Pinterest board as well as a private website to share our pictures and comments with the architect. It was more useful than making a scrapbook as it was easy for us all to access it.’

I wouldn’t be without…

‘…our oven, which we deliberated over for a long time. We liked the look of a range/Aga/Rayburn-type design but we were tempted to go for a couple of built-in ovens as they’re cheaper. We went for the Rangemaster Elise because it was on special offer in John Lewis, which meant that we didn’t get to choose the colour.’

‘I love the kitchen; it’s so bright and welcoming. The space is very versatile: the dining table can be positioned to the front of the room (great for entertaining) or under the rooflight, overlooking the garden, leaving a large living area at the other end. We bought the pendants in L’Isle-sur-la-Sorgue, France — we’d gone there for the antiques market, but ended up buying the lights new.’

If I could change one thing…

‘…I probably wouldn’t position the nursery next to our bedroom; it’s too noisy! I would also pick a darker, more dramatic living room wall colour.’