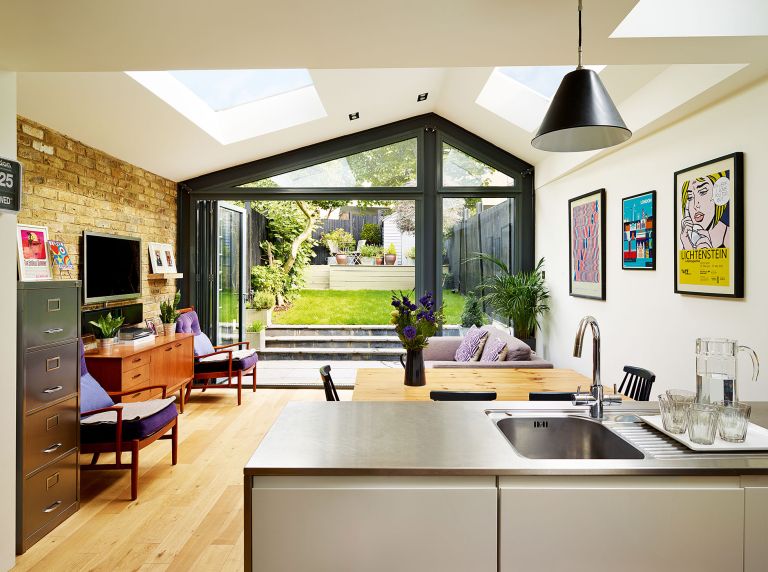 The Victorian terraced property that Matt Newman and Michelle Cox bought in 2009 was ideal for a young couple. Fast-forward a few years, however, and the three-bedroom house had begun to feel less practical as the family grew from two to three with the arrival of baby Isla.

‘It had taken us a while to find somewhere affordable in the right location in London, and we didn’t want to move again,’ recalls Matt. ‘In any case, we loved the house. When we first viewed it, we really fell for the scented jasmine growing around the ground-floor bay window and the large double reception room.’

The kitchen at the rear of the house was less appealing, however, with a relatively narrow galley layout and a space-wasting external passageway running down one side. The original wooden floorboards had been painted dark brown and the pine units were fitted with marble-effect plastic work surfaces.

‘It was perfectly habitable though and we lived with the kitchen for three years, but during that time we decorated the rest of the house, stripping the floorboards back to the original pine and reinstating the Victorian fireplaces and ceiling roses,’ explains Michelle. ‘When I fell pregnant with Isla, we decided that an open-plan family kitchen would be more suitable for us as we could spend most of our time there during the day.’

The couple contacted several architects and designers to discuss building an extension to the kitchen, including Martin Swatton, having seen one of his projects featured in a magazine. ‘We liked his design with its large open-plan layout and glazed doors,’ says Matt, ‘and when Martin visited us we were impressed by his ideas and enthusiasm for our project.’

Building into the side return passageway would give Matt and Michelle a wider space and enough additional room for a separate utility room, while extending out into the garden by three metres would create a spacious open-plan kitchen/dining/family room, with folding-sliding glazed doors opening onto the patio.

‘Martin produced a high-quality, full colour brochure illustrating his design and provided a DVD, which showed the new space from various angles, focusing on details and how it would work – right down to including images of our cat Poco,’ says Matt. ‘There were so many little things we would never have thought of, such as the vertical internal window between the living room and the kitchen, which acts as a viewing panel and creates a visual link between the two spaces.’

A vaulted ceiling and full-height glazing in a bespoke steel frame would enhance the sense of space in the new extension, with three large skylights maximising the natural light and a feature brick wall and timber flooring introducing warm textures to the contemporary clean lines.

Planning approval was needed for the proposed extension, and Martin submitted the application. One potential concern involved the position of a sewer beneath the side return of the house, where the couple wanted to extend. Although this slightly delayed the application, it didn’t prove to be a major problem.

The couple had firm ideas for the new space and once again liaised with Martin over the decisions at every stage. Metro tiles have been used in the wet room, which features a large rooflight and a distinctive tiled floor, while the bedroom is dominated by a large brick chimneybreast that has been made into a unique feature.

‘We had some communication problems explaining how we wanted the exposed chimneybreast to look, coming home one day to find it covered in gloss white paint, but it was soon sandblasted back to give it a distressed finish, which created the industrial look we were aiming for,’ says Matt, who was impressed by the quality of the workmanship in both new spaces.

The loft was completed in 10 weeks during 2013 and the family can now enjoy their finished home. They have since had their second child, Zac, and they have no immediate plans for further alterations. ‘We don’t want to move now that we’ve done so much work,’ says Michelle. ‘It’s a real family home and we absolutely love it.’