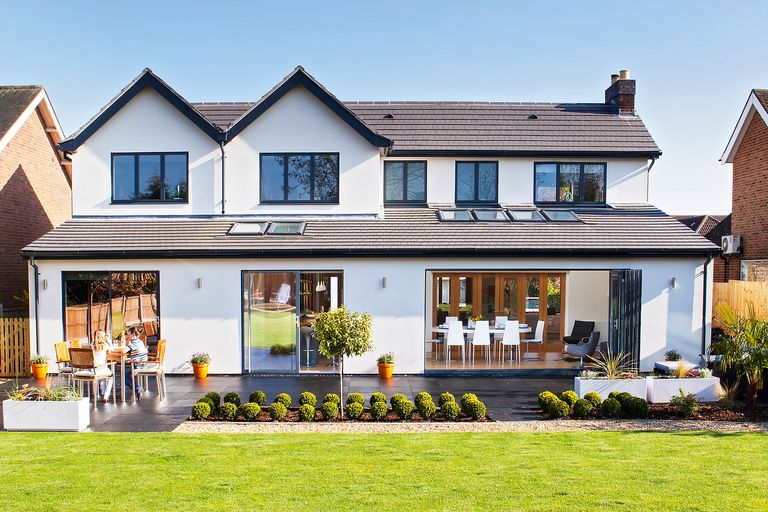 Three years ago, Sam and Patrick Regan came across the perfect project — a detached 1950s home in need of more than a little repair. With leaking flat roofs, rotten windows and little kerb appeal, the estate agent admitted that the property ‘needed some work’.

Undeterred and ready for a challenge, Sam was confident she could breathe new life into the house. Working alongside local architect Tracy Longworth of Longworth Associates, Sam drew up plans to completely remodel the house.

‘Properties of this era often have well-proportioned rooms but very little creative detailing,’ says Sam. ‘We knew that this transformation would require creativity, money, patience and hard work.’

Before buying the house, the Regans secured outline planning permission to ensure they would be able to do what they wanted with it. The existing ground-floor space was workable, but the first floor was small in comparison, with four bedrooms leading off a long corridor, and a separate WC and bathroom at the back.

‘It wasn’t habitable at first, and we had to stay with friends for two weeks while the old bathroom and kitchen were ripped out and replaced with low-cost fittings to tide us over,’ recalls Sam. The couple then stripped and painted the walls, and fitted new carpets, along with a new boiler and hot water cylinder. Once the electrics were finished, it was safe for the family to move in, and for Sam to set to work on the detailed designs.

Planning went through without any hitches, and in February 2013, after obtaining quotes from five companies, the Regans appointed their builders and work began. They built the shells for the front and rear extensions, and when it was time to knock through the existing walls, the family moved out again, renting a three-bedroom semi five minutes away.

Three months later, with the house replastered, decorated and carpeted, and the bathrooms and kitchen installed, the family could move back in. ‘We lived with rough, unfinished floors downstairs for a few more weeks while the screed dried out,’ says Sam. ‘But we were back in for the summer holidays, and able to down tools and relax as the pressure was now off.

‘We wanted to create five double bedrooms all on one level and have a large open-plan living space connected to the garden,’ explains Sam. The house was set back from the road, so to increase the footprint further still, the couple decided to bring the front of the house forward in line with their neighbours’. The two-storey, twin-gabled extension forms two new vaulted bedrooms, as well as a spacious entrance hall and extra reception room on the ground floor.

Upstairs, just one original wall was left standing, as Sam and Tracy redesigned the space to provide the bedrooms, a family bathroom and two en suites. The plans also entailed moving the stairwell and building a new staircase. At the back, two old flat-roof extensions were replaced with a single lean-to with a vaulted roof, staircase and a gable to match the existing one.

Sam’s vision of creating a large, sociable family space required some extra design ingenuity. The wall under the existing gable needed to be removed, which involved taking out two load-bearing walls. ‘The cheapest solution would have been a reinforced pillar in the kitchen, but our idea was to use a cranked beam to spread the load from the old kitchen walls to the new rear extension wall, with the beam following the angle of the lean-to roof,’ explains Sam. ‘I was determined not to have a support interfering with the new space.’

Sam was on site every day to manage the project and ensure it ran on time and to budget. Patrick, meanwhile, kept a careful eye on costs. ‘We make a good team, and tried to get most issues and decisions dealt with in the day, so it didn’t impact on our family life too much in the evenings and at weekends.’

They decided to keep the original living room as it was, with home comforts such as the much-loved orange Egg chair and plenty of family portraits. ‘We installed a recessed log-burner,’ says Sam, ‘which we particularly appreciated during the first draughty winter before the work began on the house.’ Internal bi-fold doors were installed, so the living room could be isolated or used as part of the larger open-plan space, which ‘works brilliantly for dinner parties or family gatherings.’

By October 2013, the house itself was nearly complete: the floor was fitted, doors were hung, and the exterior had been rendered. Soon after Christmas, though, Sam brought out the sketchpad again and started to turn her thoughts to the outside spaces. ‘We had no drive and no garden for a long time,’ she explains, ‘but it would have been too much to do the landscaping at the same time as the house. I’m a big believer in doing one job at a time and giving it your full attention.’

The couple wanted a dual-entrance drive with low, white-rendered walls and a low-maintenance planting scheme. For the back garden, the designs focused on family living, so a large patio, lawn and play area for the children and dog were the main requirements. ‘We treated the landscaping in a similar way to the house, in that we got several quotes and took our time to choose the right landscaper and materials,’ says Sam.

The garden now incorporates a series of vistas, and contrasting materials – such as the black limestone, red bamboo, grass and timber, and white gloss planters – all add interest and texture. ‘We chose to mix traditional planting with informal palms and grasses,’ says Sam. ‘It just needs time to grow and mature now.’

After all their hard work on the project, Sam, Patrick and the family are enjoying their amazing home, although they do have one regret. ‘My father-in-law fell ill suddenly during the project, and he passed away in December 2013,’ says Sam. ‘He never got to see the house completed.

‘When I sit outside in my favourite spot, on the decking overlooking our garden, I look at what we have created and know that he would have been really proud of us. I can imagine him saying: “Marvellous! Didn’t they do well?”’

Sam shares her experiences of renovating a 1950s property

‘Patrick and I can work well as a team! I took a year off from my job at Longworth Associates so I could give the project my full attention, being both the designer and on-site project manager in this instance. As issues were raised, I could deal with them there and then, or call Patrick to discuss them.’

‘Take your time and be patient at the planning stage. If you can live in the house for a while you can see how you use it, the direction of sunlight and what you really need from the space. Also ensure that you have enough money to complete the project; the fixtures, fittings and landscaping finish the house off, but can cost as much as the bricks and mortar! Find contractors who you can work with effectively. Mick at MRC Builders and Barry at Lasting Impressions were great landscapers.’

‘We found a brand new Best extractor on Ebay for a quarter of its list price of £1,200.’

I couldn’t live without…

‘…the boiling tap and built-in coffee machine. They are our hero products – we would be lost without either.’

‘Watching the children tuck into snacks in our makeshift kitchen in the living room, covered in dust! And our elderly neighbour nicknaming me “the Pocket Rocket”.’