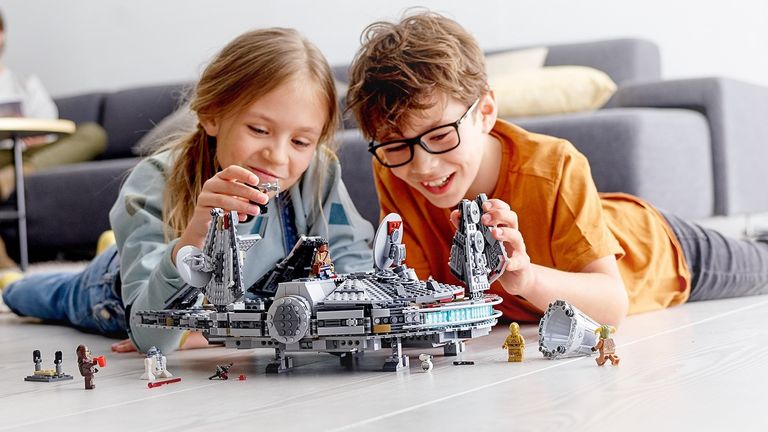 This year we're bracing ourselves like a May 4th like no other, since with kids and grown-ups alike stuck indoors, Star Wars Day is a great excuse to play! To commemorate, Lego is adding the A-wing Starfighter to its Star Wars collection come Monday, and it looks immense.

That's not all Lego is doing to commemorate, though. Through May 5th, you can get an exclusive Death Star II Battle set with purchases over $75. Perhaps we're biased, because we're still not over the Baby Yoda trend, but the first thing going in our cart is The Mandalorian & the Child set. Be aware when pre-ordering that many of Lego's newest launches won't be shipping for a few months, so it won't hurt to add some of Lego's existing collection to your order to tide you over. Fully grown Yoda, anyone?

The Mandalorian & the Child | $17.99 at the Lego Store
Suitable for ages 10+ and with 295 pieces, this set features true-to-design features including The Mandalorian’s signature weapons – a blaster rifle and a blaster pistol. The Child also has adjustable ears to create happy and sad expressions, and comes with a hoverpram.
Available for pre-order nowView Deal

Star Wars A-wing Starfighter | $199.99 at the Lego Store
Get a free exclusive Death Star II Battle set with purchase - If you've some time on your hands, the A-wing Starfighter from Return of the Jedi is what you've been waiting for. It has a removable cockpit canopy and comes with 1673 pieces. A true collectible.
Available for pre-order nowView Deal

The Razor Crest | $129.99 at the Lego Store
Get a free exclusive Death Star II Battle set with purchase - Role-play The Mandalorian and the Child’s battles with this child-friendly The Razor Crest kit. It includes minifigures of The Mandalorian, Greef Karga, Scout Trooper and the Child, as well as a 1023-piece interactive starship.
Available for pre-order nowView Deal

Yoda | $99.99 at the Lego Store
Get a free exclusive Death Star II Battle set with purchase - A true collector's item and child-friendly project, this Lego Yoda has posable eyebrows, fingers and toes and a head which turns. It's got 1771 pieces and is suitable for ages 10+.
Available nowView Deal

Millennium Falcon | $159.99 at the Lego Store
Get a free exclusive Death Star II Battle set with purchase - The most iconic starship in the Star Wars universe, with complete, detailed interior and opening top panels for easy access, the Millennium Falcon is suitable for ages 9+. It also includes 5 minifigures for roleplay.
Available nowView Deal