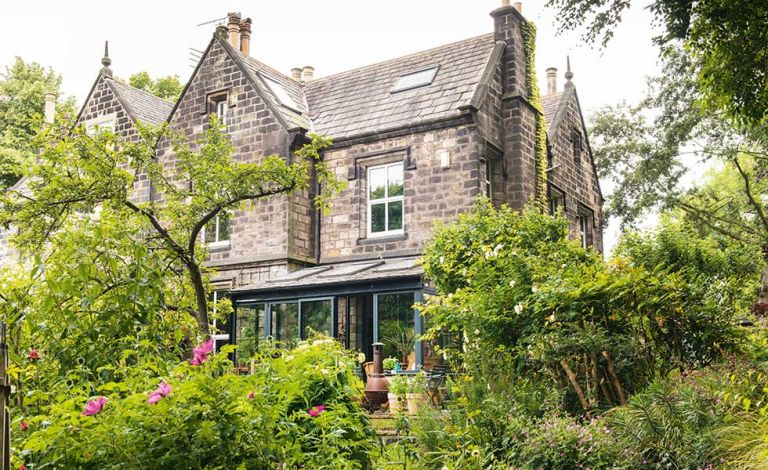 Judith Cain travels the world to find inspiration for her sought-after paintings, but the place she finds most inspiring of all is right on the doorstep – her garden.

Property: A semi-detached Victorian stone house in Leeds, built in 1848. Following an attic conversion, the home is now on three storeys, with six bedrooms.

What they did: The couple added a conservatory, opened up the kitchen and converted the attic to create two studios, a guest room and a storage area.

The garden is so important to Judith and husband Gordon that they changed the ground floor layout of their Victorian semi to open up the views.

They opened up the corridor space between the kitchen and dining rooms, installing frameless double glass doors onto the hallway to bring in more light and conserve heat from the Aga in winter. The interiors have evolved gradually with a combination of family pieces and things Judith and Gordon have bought over the years.

Judith and Gordon hired a local builder to knock out a corridor between two doors to create a bright, open dining kitchen

Double doors open into the conservatory, which links the house to the garden via Express aluminium-frame bi-fold doors. Old and new sit side by side throughout the house as shown here, where an antique Chinese wedding cupboard is sited next to one of Gordon’s pictures.

Reupholstered Habitat sofas are positioned in the centre of the living room to leave space for Judith and Gordon’s paintings and heirloom furniture. The full-length window opens to give direct access to the garden

The conservatory at the back of the house was completed under permitted development rights. The new Velux windows allow plenty of natural light into the couple’s attic studios

The entrance hall features the original stone staircase with a Victorian cast-iron balustrade, and an arch-top mirror that the couple have had for years.

Judith’s large original artworks and a Japanese kimono make good use of wall space and create balance in the high-ceilinged bedroom. The bedspread is from a French market and the rug from Kazakhstan, while the dark furniture is all antique

The folding screen was handmade by artist David Bland. Judith and Gordon painted the floorboards grey and varnished them to complement the cast-iron fire inset. ‘We like shapes, textures and tones,’ says Judith. ‘It’s not a particularly planned way of furnishing the house, but it seems to work for us’

The distinctive bathroom features beautiful 1930s Pilkington tiles and a large framed print by Judith. The bath was moved closer to the radiator to make way for a new walk-in shower