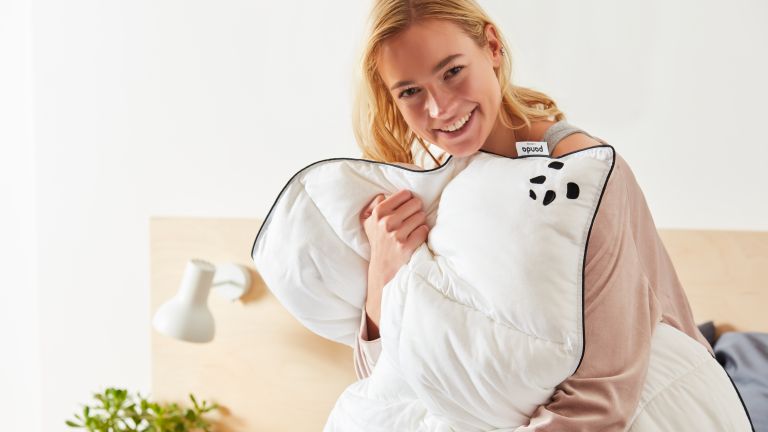 Buying a new duvet can be a bit of a minefield if you’re not familiar with the many fillings available, but since the release of a bamboo duvet that’s temperature regulating, highly breathable and hypoallergenic for all-year use, it’s really a no-brainer. It's also sustainable and vegan as an added bonus. Enter: Panda’s Cloud Bamboo duvet.

The bamboo duvet is a creation from eco-friendly and sustainable brand Panda, who are redefining home essentials for the good of the planet. Not only do they sell quality products that last, but they ensure fewer materials end up in landfills. Oh, and did we mention that they're the leading brand in the UK which specialise in products made from bamboo? Pillow, mattress, bedding set – you name it, they sell it made from bamboo.

Filled with 50 per cent bamboo fibre and 50 per cent nano microfibre to offer a cosy night’s sleep whatever the season, there are several reasons to buy The Cloud Duvet. To name a few, you’ll save space storing only one duvet (more room for shoes), and it’s suitable for everyone you could possibly imagine including your elderly (and always cold) nan. It also has a five-year guarantee and delivery is free!

Never heard of a bamboo duvet? Intrigued? Due to its nature, you'd imagine a bamboo duvet to be rough, when in actual fact, it's not just extremely soft but also lightweight and silky. Let’s paint a picture… close your eyes and imagine yourself lying in a cloud – that’s what it feels like. The Cloud Bamboo Duvet is light, fluffy and keeps your body temperature regulated. No wonder they call it the cloud.

2. SUITABLE FOR ALL-YEAR-ROUND USE

Filled with a mix of bamboo fibre and nano microfibre, the Cloud Duvet features temperature regulating properties inside to ensure you stay cool on warmer nights and warm on colder ones. Its highly breathable 300 thread count bamboo cover certainly helps to keep the air flowing, too.

Talking from experience, although the duvet may appear to be thin and lightweight at first,  it’s really quite incredible how it insulates heat when necessary. On the first few nights of using, your body will be getting used to the duvet, but after that you’ll never wake up from being too hot or too cold again – trust us.

Ideal for those who suffer with allergies, sensitive skin or eczema, the Cloud Duvet is made from bamboo which is naturally antibacterial and can protect skin against irritation and allergies.

Due to its bamboo filling, the Cloud Duvet is cruelty-free and vegan and no animals are harmed in the making. But, vegan or not, you must care about the environment, right? Well, if you didn't know already, bamboo is one of the world’s fastest growing and dense resources. Along with that, it also self-propagates, so doesn't need replanting once harvested, and it doesn't require any pesticides or fertilisers to grow.

Another huge bonus is that bamboo absorbs more carbon dioxide and releases more oxygen into our atmosphere than other plants and even trees, in turn reducing greenhouse gases. It also uses a third of water compared to plants such as cotton.

Our favourite part is that when the duvet arrives, it contains no single-use plastic packaging. The packaging used is decomposable and made from 100 per cent recycled materials such as kraft paper. The ink used is also water based so not harmful to the environment and PVC and phthalate free.

They say a good quality duvet should last five years, that’s around 1,825 nights of sleeping. Panda pride themselves on the fact they make their products to last, and they pay the closest attention to the finest of details.

As well as being filled with nano microfibres to make the duvet fluffy and bamboo to ensure it's soft and lightweight, the duvet is made in a Bavarian style (see image above) to keep the filling evenly distributed to ensure there's no cold spots.

We're more than aware that there’s nothing more annoying than waking up during the night because your duvet has somehow dropped down to the end of your duvet cover. Thanks to the fact the Cloud Duvet has four durable fasteners on each corner to hold your duvet and cover in place during the night, no matter how much you toss and turn, you’ll be cosy and covered.

The duvet is also super easy to care for, as it’s machine and hand washable, so every few months you can chuck it in your machine if you don’t fancy lugging it to the dry cleaners. Although it can’t be tumble dried, the fact it’s so lightweight and fluffy means it’ll air dry in no time. And, if something does happen to go wrong, it comes with a five-year guarantee.