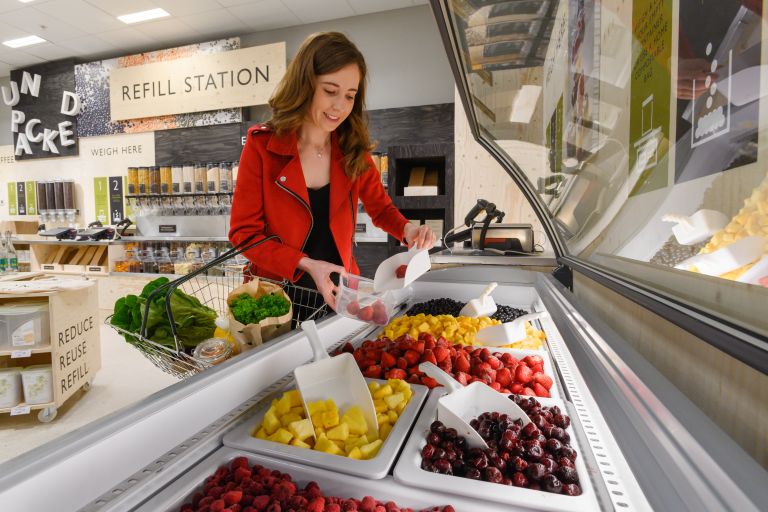 Plastic waste: arguably 2019's greatest villain. Yes, thanks to the Attenborough effect and, latterly, the BBC's War on Plastic documentary, single use plastic has, quite rightly, fallen out of favour as we come to understand its devastating effects on our planet. While switching to a reusable shopping bag/coffee cup/water bottle is a great first step, supermarkets have long been urged to get on board and cut the plastic waste caused by their packaging.

Now, Waitrose has responded to the need for further change, announcing its intention to trial packaging-free food in their Oxford store before, hopefully, rolling it out across the country.

While it's relatively easy, in most mainstream supermarkets, to ditch some plastic by opting for loose fruit, veg and bread, when it comes to other essentials, the story becomes slightly less straightforward. But, that could all be about to change, with Waitrose suggesting that they'll offers rice, pasta, cereal and other dried goods, as well as frozen fruit, washing up liquid, some toiletries and alcohol, in their new packaging free basics range. As if this wasn't exciting enough, Waitrose is suggesting that prices could be as much as 15 per cent cheaper. Saving money and saving the planet? We're on board.

If you're interested in sustainability, you may already be aware of a significant increase in the number of independent bulk stores popping up across the country over the past few years. But, for a mainstream corporation to make the switch is indicative of a greater change in consumer practices and a significant shift towards sustainability and conscious shopping.

But, if food doesn't come in plastic packaging, how will you get it home you may be asking? Easy, simply bring your own containers. These could include:

While Waitrose can't be sure how this new incentive will evolve, we're excited to watch their Oxford trial unfold and keep our fingers crossed that it could be coming to a Waitrose near us in the not-too-distant future.