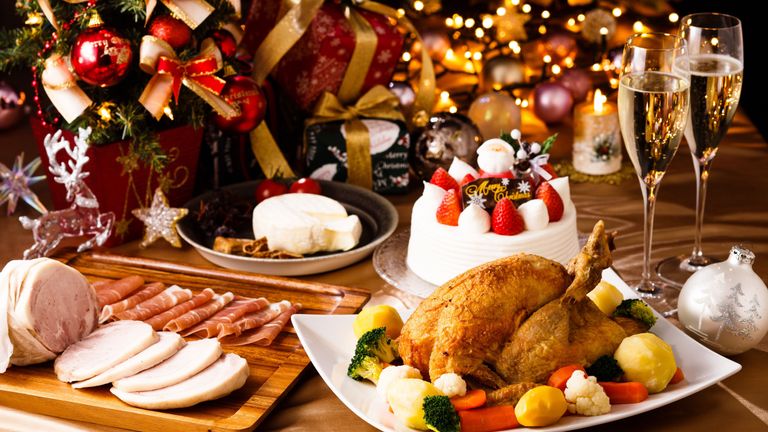 Christmas food waste is a recurring problem in many households, with recent research* showing that we throw away a mind-boggling two million turkeys, five million Christmas puddings, and 17 million Brussels sprouts every year.

So, what are the best ways of reducing Christmas food waste?

Whether it's the traditional turkey, or a meat joint, or a fish/seafood alternative to turkey, the thing to remember about meat and fish is that they do not keep in the fridge very long – three days maximum. If you're buying your meat or fish in advance, freeze it as soon as you've bought it. Don't bother smelling it to check if it's okay, either: even meat/fish that hasn't begun to smell bad may have grown bacteria that can give you food poisoning. An astonishing 66 per cent of us perform the 'smell test' on raw meat and fish – just stick it in the freezer instead. If you don't have enough freezer space, buy everything a couple of days before Christmas.

2. Do not defrost at room temperature

More than half of us (54 per cent) defrost meat and fish at room temperature. Don't do this – you are risking ruining Christmas festivities with food poisoning. Defrosting can take hours, which is far too long to leave out raw produce at room temperature. Always defrost overnight in the fridge.

3. Do use up leftovers no later than Boxing Day

Everyone enjoys a turkey sandwich on Boxing Day – but don't leave the cooked meat in the fridge much later than that. Cooked meat is safe to eat one to two days after cooking (when stored in the fridge, of course); cooked fish and seafood shouldn't be kept for longer than one day. It's a different story with cured meats and fish: if they're sealed, they'll keep a good few weeks; once opened, they should be eaten within three to four days. Also bear in mind that cooked food shouldn't be reheated more than twice, and that includes in Christmas pudding.

Find more ways to use up Christmas turkey in our recipe guide.

4. Do be more relaxed about use-by dates on veggies

Expiry dates on packs of vegetables are more for guidance on quality, rather than indicating whether they're safe to eat. There's nothing wrong with vegetables that have gone a bit flabby – they'll still taste great in a stew. Root vegetables in particular will not make you ill if they're a few days out of date. Salad can, but you'll know when it's definitely gone off just by the look of it.

Tip: don't store potatoes in the fridge. A cool, dark cupboard is best; potatoes acquire a weird taste and texture when stored in the fridge, so store them correctly to avoid wasting them.